You are at:Home»Netflix»How to Bypass Netflix Block of Proxies, VPN and Smart DNS
Important: Netflix has recently declared that they will block VPN, proxies and DNS unblockers. However, the Smart DNS provider Unlocator has managed to bypass the block. As a result you can still use Unlocator to watch US Netflix from anywhere in the world.
By Andrew Walker on January 2, 2020 Netflix

Netflix has recently announced that they have started blocking various unblocking services aimed at giving users access to the full Netflix catalogue regardless of the users location. These services have long been a thorn in the side of the content holders rather than Netflix, who are getting paid anyway.

In a recent blog post Netflix has announced that they will start blocking various proxy services and apparently this has already started happening.

Some users have been meet with the message “You seem to be using an unblocker or proxy. Please turn off any of these services and try again“. 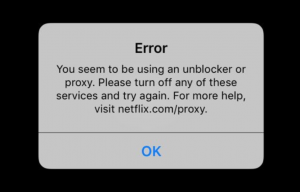 However, the various providers in the market has all announced that they will be adapting to the changes put forward in order to continue to support region switching for Netflix.

How to Get Around the Netflix Block

Our test winner Unlocator is still 100% compatible with Netflix and by the looks of it they will continue to be. The Unlocator DNS service allows you to unblock 218 different channels and switch between 31 different Netflix regions.

All you have to do is change a single number in your network settings on the device you want to use. You can use the service on anything from a computer to a smart TV. The list is endless.

Even if you have never tried changing network settings on your device before you will be set up in minutes – really.

Unlike other services, Unlocator only routes a small amount of your traffic, which in turns mean that you don’t see any type of speed reduction. On top of that the service allows you to appear in more than one place at a time. You can watch BBC iPlayer and US Netflix at the same time!